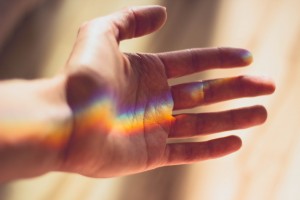 It’s not unusual for grievers to feel disconnected from the world around them, but for LGBTQ grief and loss, a lack of resources can result in increased seclusion and isolation.

While the issues faced in grief can be different for everyone, what every griever needs is the feeling of validation, acceptance and support.

Fifteen years ago I was working at a community hospital at the Jersey Shore. There I facilitated support groups and presented on community health topics in a program designed specifically to meet the needs of seniors.

I had a great boss. She was enthusiastic about the services we were providing and always challenged me to find new ideas and new ways to help our community. One day as we discussed our upcoming schedule, we agreed that the program was missing something. We had bereavement groups and caregiver groups and disease-specific groups like Cancer and Parkinson’s and Scleroderma support, but still we wondered if there was a population that had slipped through the cracks.

I’d like to say it was a dramatic lightbulb moment, but ultimately I think we somehow just came to realize that there were absolutely no services in the area for LGBTQ seniors who had experienced a loss. Nothing! The closest service (and still one of the biggest and best out there) was SAGE in New York City. I spent some time talking with SAGE and getting to know their program better, and soon our own LGBTQ grief support group was born.

That first night, we had two people. And while this was at first sort of encouraging, I was a bit deflated to realize they had come together. So did it really even count as two? The second meeting, same two people, but they were a lovely couple who had become partners after the loss of their significant others years before, and they were confident and encouraging and told me that if we kept this group going…in time, people would come.

And they were right.

Slowly people found out about the group and made their way in. Mostly they were there to mourn the loss of a partner, though some came if they had a recent loss of a parent, sibling or friend.

One man (I’ll call him Alan) told the story about he and his late partner (who, for the sake of this story, we’ll call Dave). They struggled throughout their relationship to find equal rights for their insurance, money, and home, but the real challenge came when Dave became ill and Alan wasn’t allowed to visit Dave in the ICU because Alan wasn’t “family”. This was before legalized marriage or domestic partnership, so after Alan recovered they came up with a plan. Dave, who was several years older, would legally adopt Alan, so that Alan could finally be afforded all of the rights he deserved after almost 40 years of he and Dave being together.

Others who came to the group discussed the challenges in finding support from their families. Many didn’t have family support of their relationships and talked about how hard it is to find understanding after a loss if the significance of the relationship was never recognized or validated in the first place.

One of the women talked about going to a bereavement group for people who lost their spouse. While everyone there was supportive and welcoming, she still found it hard to relate as so many people talked about their children and grandchildren as the center of their support system. This woman and her partner had never had children.

One man said that by attending our group he was “coming out” in public for the first time. He never even took the bereavement days from his work because he was afraid to say why he needed them.

And another member told us about looking for bereavement support in her local LGBTQ chapter. There she faced no discrimination based on sexual orientation of course, but felt like a different type of outcast. She was “old” and this group was filled with youth and energy and excitement. They socialized and planned outings, like trips to the beach and to the city. And while some parts of this created a nice distraction, she felt there was no one there who she could discuss her grief or loss with.

The stories go on and on….

Two years later, when I left the group to move to Pennsylvania, there was as many as 20 to 30 people attending our LGBTQ grief group each month. I struggled with moving away from this warm and wonderful group – there was such camaraderie, such an ease and comfort, they supported each other and took care of each other like no group I had seen before.

Just before I left, one member of our LGBTQ grief group fell and broke her hip. She was hospitalized for days and was in pretty bad shape. The group sprang into action. Visiting her in the hospital, taking care of her dogs until she returned home, driving her home once it was time to be released, and making sure she had all the food and comfort she needed for the weeks following…

She told me that if the fall had happened before she started attending this group, she would have had no support and no one to take care of her. It had only been a few months since her partner had died and she truly believed our little LGBTQ grief support group had saved her life – in more ways than one.

This group taught me something. It taught me about the importance not only of support, but of finding the RIGHT support. Of connecting with others who understand who we are and where we’ve been, because in so many ways they will be the only ones who can help guide us to what comes next…

Even all these years later, when people call looking for a referral, I am challenged to find local bereavement support for the LGBTQ grief community. In loving tribute to my New Jersey group who I never wanted to leave…Grief in Common has been created as a place where the LGBTQ community can find support following the loss of their loved one. To find others who can understand, or to share your story, please join us at www.griefincommon.com today.

93 thoughts on “LGBTQ Grief & The Importance of Finding Support”