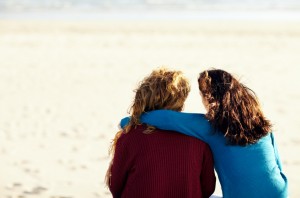 Siblings. Throughout our lives our parents may marvel at the difference. Two (or more) people raised in the same household by the same people, and yet such contrasts in interests, temperaments, and general outlooks on life.

There are theories, of course, like Alfred Adler’s idea of birth order and the role it plays in who we become. Parents themselves will take the credit or the blame, finding explanations that seem to fit for why each child is so different.

Whatever the relationship, good or bad, once we move out of our parents’ home and no longer have to share space with our sibling(s), the only time we really have to see each other (unless we want to) is holidays and big family events.

That is, until one of our parents becomes ill. And then suddenly- everything changes.

Already stressful, this complicated time of fear and uncertainty can often become muddied as each new perspective of what should be done and how things should be handled is brought into the mix.

Decisions are made and we end up taking on new roles as we face the loss of a parent.

The Boss – as the title would suggest, this is the child in charge. They may not necessarily be the oldest. This may be the child who lives the closest, who has a job that makes them more comfortable with illness and medical decision making, or is simply the one who has been designated as in charge (either by themselves or the rest of the family).

The Optimist – this child will likely be very present and part of the process of decision making but they will most often be the one wanting a second opinion, or encouraging the patient to try a new medication or course of treatment. The optimist is less comfortable talking about end-of-life care and would prefer to focus on hope and good outcomes only.

The Planner – similar to the boss, the planner is very involved in decision making and will often seem to be calling the shots. But the planner is going to be more focused on the non-medical, non-health issues. This child feels more comfortable planning schedules, and food shopping, and may act as liaison between siblings and extended family.

The Evader – In many cases, if there are enough children to take care of Mom and Dad, then there’s going to be at least one child who is not as involved. They may live further away, or choose to stay at a distance. They may say they’re too busy with work or their own family, or they may flat out say that they’re not good at “this” (caring for a sick parent) and/or don’t want to see them “this way” (sick and potentially dying).

I don’t want to be too cute about the whole thing. I know it’s not quite as neat and orderly as that. And we haven’t even touched on variables such as step families, half siblings, and estranged relationships that can complicate things even more.

It’s also possible that one person in the family is taking on more than one of these roles. Perhaps roles change as time progresses and conditions change. And if you’re the only child, it’s likely you’ve had to play all roles at any one time.

Regardless, the simple fact is that there are reasons behind each of the roles we play. And a quick review of history usually gives us our answers as to why our siblings have taken on these roles when our parents are sick and dying.

What this doesn’t account for, though, is the role we each played in the family as we were growing up. When a person who has lost a parent finds themselves truly frustrated at their sibling(s) for how things went down while their parent was still alive, I will ask “what was your brother/sister like as you were growing up?”. It may take awhile but ultimately you see this realization cross their face as they conclude, “I suppose he/she was always like this”.

And interestingly there is comfort in that.

Because while it’s never easy to be frustrated or even feuding with a loved one, it certainly does seem more comforting if we know that we’re all just sort of fitting in the roles that we always have as we were growing up together. We’re just doing it on a grander scale.

I’ll say this often, because I’ll always believe that few people are intending to be hurtful. I believe that most people are doing the best they can in the situation that is presented to them. When people say, “well then, their best is pretty awful” they may of course be right. But then why is their best so awful? What have been their experiences and what has happened to them that causes them to cope in a way that seems so out of sync with our own instincts?

We can never change another’s behavior. Most times we can’t shake the roles handed to us – especially those that may have been inadvertently assigned at birth.

But if we can find forgiveness and compassion for ourselves and for each other, especially in times where we (or those around us) fall short, it certainly makes us feel more warmth and love for our siblings.

Getting along and playing nice with our brothers and sisters. Isn’t that all our parents wanted for us in the first place?

3 thoughts on “Sibling Dynamics Following the Loss of a Parent”