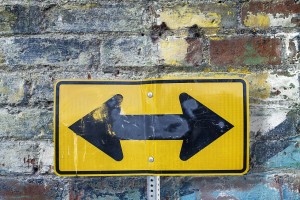 If there’s one thing I’ve learned, it’s how universal the experience of grief is. As unique a journey as each griever travels, there are still so many commonalities that connect the bereaved to one another, and nowhere is this more evident then right within the forums of www.griefincommon.com.

Occasionally it seems that a particular theme pops up (the blog “What to Do If You Don’t Know What To Do After Loss” was born from this) and the importance of this just can’t be ignored.

Recently I’ve noticed how often a griever has started their story with, “I’m feeling so lost”. I would guess just about every griever has said this at one point or another. But I couldn’t help but wonder, what does it really mean? And does it mean the same thing to each person?

Merriam-Webster lists 9 meanings for the word “lost” and all of them seem to apply, in one way or another, to the griever:

But the good news is, I do believe there is hope. And hope can always be found, if you know where to look.

So think of a time in your life when you were lost. Not emotionally, but literally lost, in the car, driving in circles, taking a lot of wrong turns and not knowing where to go next or where you would end up.

Did you ever stop? Did you ever take the chance of pulling over, getting out of the car and asking someone for directions?

We can try to do this alone. We can keep driving endlessly until we run out of gas. Or we can stop and ask for help. And sometimes, we may just be amazed at the help we receive.

Because the person giving the directions has been down this same road. They know its twists and turns, and how unclear some of the signs can be. They understand what it means to feel alone and lost and the frustration you feel because they too struggled when they first tried to make it down that same road.

That’s what grief support looks like. You don’t have to be wandering aimlessly with no end in sight. Support from friends, family, community, your church, local hospital, or online forums can make a difference.

There is no part of loss that is a choice. There is also no amount of yearning, second-guessing or wishing that can change or alter the past. The only control left, the only thing that puts a griever back in the driver’s seat, is making a decision to find help when they need it, and to take a step toward the journey of what comes next.

Feeling lost in your grief? It only takes a quick visit to our community to see that you’re not alone. And it’s amazing the difference that validation can make.

Connecting with other grievers allows a chance to be heard, understood, found…

You can find us right here: www.griefincommon.com. We hope you’ll join us today.

4 thoughts on “Feeling Lost After Loss”