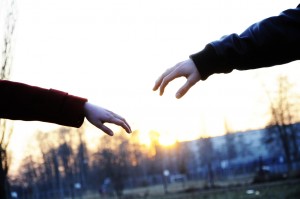 There’s no question that the loss of a loved one can be felt in every part of life, but what happens when your loss is hurting your relationship? If you have lost a loved one you know (all too well) the pain, confusion and anger that can come with it. Even if support is strong in the beginning, most grievers will say that typically the consoling fades with time. And it’s one thing to not feel comforted by those we expect it from, but even worse when it feels that the loss is starting to come between us. This can happen in so many ways…a woman who lost her mother, not feeling supported by her spouse…or a couple who has lost a child, and each of them grieving very differently…a man who lost a good friend and his wife doesn’t understand why he is hurting the way he is…it can happen between friends, siblings, or just about any other relationship we have.

The real life example I witnessed was of a woman in her sixties who had lost a daughter. This woman and I met several times and each of our conversations were an intense emotional outpouring of her very deep and relentless pain along with a tangible yearning for her daughter.

Several months after our first meeting, her husband called me. She was in the home and I spoke to her briefly to get permission to speak to her spouse (anyone in the healthcare field will appreciate this confidentiality/HIPAA step). He was the stepfather of the daughter who died and had been married to the bereaved for at least twenty years.

“I’m worried about my wife,” he told me, “I don’t think she’s doing as well as she should. She’s crying all the time and nothing I do seems to help. I have tried to keep her busy or get her out of the house but she just wants to stay home.”

We talked for a bit. I did my best to educate him on the grieving process and tried to explain that while troubling and very difficult to see, a lot of what his wife was going through was “normal” after a loss like the one she had experienced.

He went on to say, “I just think maybe it’s time for her to move on. Her daughter was a great girl, and I loved her like my own. But there’s nothing that can be done to change what’s happened. My wife needs to start moving past this, she can’t just walk around crying all the time.”

So let’s take a minute here because I would guess that for most his response could trigger anything from disappointment to downright outrage. While I always try to remain objective, I’ll admit it was hard to not be at least a little frustrated with what seemed to be a lack of empathy. Especially when I thought of his wife, the sweet shell of a woman, whom I had come to care about after meeting so many times. Because how could anyone challenge her way of grieving, and most of all how could it be her own husband?

But I didn’t say anything. Instead, I listened. What I heard and what I slowly realized is that while this woman lost her daughter, this man lost a stepdaughter. And from his perspective, he had also lost his wife.

Because his wife, and everything that he knew about her and loved about her, and everything that made her “her” ceased to exist the day her daughter died. He was grieving too. His wife was gone and the life they had enjoyed together no longer existed. Every moment of his every day had been taken over by the grief that had moved into his home. He was as consumed and wrecked by it as his wife – and yet their responses couldn’t have been more different.

We talked some more and I asked him about himself. He said he was a fixer. He had always been someone that when faced with a challenge, didn’t focus on the problem but the solution instead. He had a matter-of-fact approach to life in general and up to this point it had served him well, both at home and in his business.

He didn’t know what to do with this person in his home. He didn’t know how to fix it. He saw a problem, he saw the pain his wife was feeling, and all he wanted to do was to take it away, make it better and move on.

He was frustrated by his inability to help. He had never felt so powerless before, and he hated the feeling of not being able to make his wife better.

We decided that perhaps the three of us should meet and when we did, we spoke for some time. I tried to make sure that both sides had equal time to talk, but more importantly – equal time to listen. Like most issues between two people they each had their own perspective on the past several months, and they each felt justified in their feelings.

*She had lost her daughter, a pain that she never could have prepared for and never asked for

*She didn’t know how she was “supposed” to feel, but she knew that she felt incapable of feeling anything other than a deep sense of heartache and hopelessness

*His feelings mattered of course, and she was sorry not to be able to care for him or engage with him in the way that she used to, but she didn’t feel she had the mental energy to take care of him or look beyond anything but her grief

*She felt that he was being insensitive and that he simply didn’t understand that her grief did not feel like a choice, and that if she could be happy and “normal” again, she would

*He adored his step daughter. He was there for every step of her cancer diagnosis, treatment, and ultimately for her time on Hospice. He held his step daughter’s hand, drove her to chemotherapy, and helped out with her young children as she continued to decline

*He too felt helpless and hopeless. Not just at the loss of this beautiful girl, but at the changes he had seen in his wife. He had done everything he could to help her and nothing seemed to be making a difference

*There were times that he felt his efforts to help and comfort his wife went unrecognized. She had so much anger, and at times it felt that the anger was directed at him and he simply could not understand how that could be. She was snapping at him a lot and was very short tempered and he felt hurt by those outbursts when all he was trying to do was help

This is no easy thing. To get two people to speak openly and honestly can be tough at any time, but especially in the midst of grief and frustration it can be almost impossible to articulate just why we’re upset or what it is we need. But there was a true love and connection between these two, along with a genuine desire to want things between them to be better. Sometimes that’s all that’s needed to get things going in the right direction.

There wasn’t a lot of advice I could give them. In a lot of ways, the help came in providing a place and opportunity for them to simply talk. But what I did say is that when conflicts arise in any relationship we tend to pit ourselves against one another, when what we should be doing is placing ourselves on the same team. I encouraged them to see that they were not each other’s enemy. That in fact they were on the same side and that this loss and this grief was the “enemy”. Not her daughter of course, but the cancer, or death itself – that was the catalyst and they were both casualties in the aftermath of this horrendous loss.

Together they realized that in their own way, they were both hurting. They were coping differently, but they recognized that they were approaching this loss in very much the same way they had other things in life before the loss (her: emotionally, him: logically). The loss amplified these traits. What had once been complementary characteristics now made them feel like two totally opposite people.

And it’s important to remember that neither was doing it the wrong way. Yes, the husband may have needed a little more understanding about the grieving process. But we have to forgive people for the things they can’t possibly understand. And on that day that was something the wife agreed she could do. Just as he agreed to listen and validate more…even if he didn’t always understand.

This was a “success story” I suppose in as much as any part of the grief process can be a success. And I recognize that for some, it won’t be as clean as easy as this. So what can you do?

If you’re the friend or family member who is trying to be supportive while feeling a distance growing between you and the person you’re trying to help: don’t give up. Don’t take it personally, and don’t stop being there for the person who needs it. This will take a thicker skin and a tenacity that this relationship never needed before, but as much you can, remind yourself that the feedback you’re getting from the person you’re trying to help (sadness, anger, disinterest) is not about you. It’s not even about them! It’s about their grief. And right now, they can’t see beyond it. Give yourself breaks from it. Know that you don’t have to be the saint of patience and understanding at all times. But in general, try to show the griever you’re trying to help in any way you can. Validate that the grieving process can go on longer than anyone thinks it should and that no two people are going to grieve the same way. And tell them as much as you can that whenever they are ready, you are there for them.

For the griever: forgive. Forgive those who don’t understand. Forgive yourself for being forgetful, irritable or disinterested. Remember that the person trying to help is likely confused and hurting too. If they don’t grieve this loss along with you (which is unlikely that they’re not grieving too in at least some way) than know they are grieving the change they see in you, and they are grieving the change in your relationship and they are feeling powerless to do one thing to help any of it.

And when your friend or loved one is telling you that all they want is for you to be happy (even if happiness feels like a distant hope)….listen and know, with all your heart, that they truly mean it.

Still struggling to find those who understand? There are grievers here who know the challenges and can relate to what you’re going through. Find them here by joining free today.

9 thoughts on “When Your Loss is Hurting Your Relationship”