Every now and then we receive requests to contribute stories from those who have sustained a loss. It’s what our forums, “See and Share Stories” are all about. Because the act of sharing a grief story can help the teller as much as it does the person hearing it. “Owed to my Mother” is a new book based on Nadine Keahon’s journey leading up to and following the loss of her own mother. 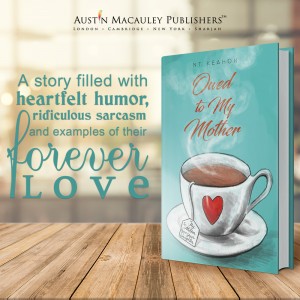 There are a lot of books on grief and loss, but this one has a different take. Instead of a self-help model, this book is written as historical fiction, to help make it both relatable and readable.

In mid-2004, Nadine, a self-confessed workaholic, received a promotion that felt like she had achieved the pinnacle of her career. But a month into this new role, she found out her mother had stage 4 cancer. Nadine was forced to choose between her career and her family. In her first book, Owed to My Mother, Nadine chronicles the story that unfolds from there—with heartfelt humor, sarcasm, and love.

“I started writing this book 12 years ago, after my mother had died, and I had all the enthusiasm and motivation to see it through to the end. But I got about 3 to 4 months in, and lost my drive. My lack of balance between work and life took over, and I put the book on hold, planning to finish after I retired. But then, something miraculous happened about 4 ½ years ago. I had a stroke, and was left partially paralyzed on my right side. Although this would not seem like a blessing, it actually taught me to be patient with myself (and others) as I continue to work hard at getting my mobility back. I’m at about 70% percent there; I still walk with a limp and can use my right hand for most tasks, except for writing and typing, which is almost ironic at this point. I also learned that whatever goal is haunting you when you first open your eyes in the morning, or when you’re taking a shower, or walking your dog, you have to find a way to make time for that goal, and do everything you can to achieve it. For me, it was to finish this book. So, I started writing on weekends from May to November of 2017, and I found a publisher in 2018.”

Here is an excerpt from her book, below:

My entire life, my mother has been a force of invincible physical strength. Although she stands a mere 5’3” tall, she can often possess the manpower of two large men, Arnold Schwarzenegger sized men, and will use that power to move large pieces of furniture from room to room whenever it suits her. But for the first time in her life, this pain, which seemed to isolate itself in her mid-back and chest, now restricted her. I continuously reminded her to take it easy and would often make her rest for hours at a time. By Christmas, the pain was excruciating and would often land her in bed for days. Yet she still classified her torment as “nothing” and didn’t see the need for a visit to the doctor. That was when the threats began. I threatened to never come home again, well at least not until next Christmas. I threatened to boycott Mother’s Day and her birthday for the next year. I even threatened to eat meat on Fridays during Lent, which would potentially damn me to hell for all eternity, if we actually went to church. I was never quite sure which threat proved to be the winner, but she finally made an appointment for early January. The January visit to the doctor was the first of many. For the next month and a half, she was subject to every test imaginable. Blood work, Mammograms, CAT scans, MRIs and Spinal Taps had become a normal occurrence with each appointment. Every test warranted new questions, not answers, and her diagnosis varied between the possibility of Lupus and Multiple Myeloma. Each time a new theory was presented, Jimmy would immediately research the condition on the Internet to see what we were up against. We remained confident she could beat whatever came her way. But it was not long before the doctor first used the “C” word. Cancer. The roulette wheel had landed on cancer and we’d give anything for a chance to spin again. My mother had Stage 3 Metastatic Breast Cancer. I remember pleading with God in my head for it to be a mistake. Please God, not her, anyone but her. And metastatic…what the hell does that word mean? Within hours of the news, I knew that metastatic was the medical terminology used to indicate when a person’s cancer has started to spread. In my mother’s case, she had a small tumor on her breastbone, which went undetected during her annual mammograms. This new word, metastatic, proved to be critical because the cancer was now in her bones and the fall she took in September had left her with tiny fractures in her spine, hence her pain. Stage 3 implied she had a five-year survival rate of 49% to 56%. I immediately dismissed the time limit and increased the percentage to 90%. After all, this was my mother and if anyone could beat cancer, it would be her. The news received was overwhelming and terrifying. It introduced me to a level of uncertainty that was unimaginable. But if there was anything I could be certain of, it was that I knew I hated the term metastatic and the word “stage” should only be used when referencing musical or theatrical venues.

Want to read more? Get your copy on amazon by clicking here: goo.gl/4BMQ7H.

And remember, we all have a story to share and letting others hear it can be such a meaningful and healing part of the grieving journey. Share your story by joining us today: www.griefincommon.com.