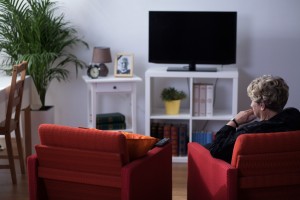 When you gather a group of people who have lost a loved one, one topic that inevitably comes up is what to do with their “stuff”: clothes, medicine, eyeglasses…

You can split a room on this topic. One half who are holding on tight to their loved one’s belongings, keeping the toothbrush where it was left, shoes where they were taken off, and medications on the counter top.

The other half says they have a hard time looking at these belongings, as they feel they are a constant and sad reminder of the person who is no longer here. I remember a man telling me that he re-painted the entire inside of his house, simply to cover over and remove the pain he felt in looking at the colors and decorations his wife had chosen.

There’s no right or wrong answer in this debate (See our previous article on “Shoulds” if you need a reminder of that).

But what happens when it’s not so simple, and you’re finding it difficult to move forward. Let’s say you have cleaned out a bit by donating eyeglasses, throwing out those things that held little sentimental value, and giving away old clothes to family who wanted them.

If you shared a home with the person who has died- slept in the same bed, sat at a kitchen table with them each day, had “your” seats in the living room when you watched TV together- how do you handle being in those places without them?

This was the question presented to me one day by a woman after the loss of her spouse.

It had been several months since he died, and while she said she was coping well in a lot of ways by keeping busy and finding support from family and friends, she recognized that being at home was a true struggle.

She found herself staying out as long as possible, wandering the mall, procrastinating at the grocery store, driving the long way home — anything to not go home.

This isn’t unusual, especially for those who have lost a spouse. The quiet and loneliness of the empty home can sometimes be too much to bear.

Was moving to a new house the solution? Wouldn’t it be easier to be in a place that her husband had never been, with none of the memories or reminders? But no, she decided. Being in a place he’d never been would only make him feel further away.

And besides, at that moment in the very early days, she simply didn’t see herself having the energy to move. It was always an option for one day, but for the time being she knew she would be staying put.

And then, an idea:

If you can’t stand to look at the empty chair, sit in it.

If part of what is so challenging about being home alone is having to constantly face all the places your loved one is supposed to be, change your perspective – literally.

These places that we are “assigned” to in the house happen so organically and usually with no talk or planning, and yet they are so firmly cemented they seem almost impossible to change. But they aren’t.

And as I suggested this to the woman above she was skeptical at first, because in some ways the advice seemed maybe a little too simple.

The next time we met, she smiled and told me: “It worked.”

No, it didn’t take all of her pain away, and she wasn’t finding herself anymore eager to get home.

But when she was there she experimented with the idea. At breakfast, instead of sitting at the table in her seat, looking where her husband was supposed to be (or standing at the counter, avoiding the kitchen table all together as she had become accustomed to doing) she sat in “his chair”. And she said it put her strangely at ease.

Dinnertime was spent in front of the TV, but rather than sitting on the couch as she was used to doing, she sat in “his” recliner, and put up her feet, just as he used to do. When she got cold in the evening, instead of grabbing one of her sweaters, she picked out his favorite old sweatshirt and put it on.

When it was time to sleep, it felt far too strange to switch sides completely. But she did inch just a little closer to the middle, and felt it help shrink the void.

For her, this simple practice wasn’t just about filling the empty spaces so she no longer had to look at them, it made her feel closer and more connected to the places and times and memories they shared. It made it just a touch more bearable to be home.

It made her feel closer to him.

If you’re finding it difficult to move forward after the loss of a loved one, know that there are people you can talk to about your experience.

Our forums include a section labeled just that: “Finding it Difficult to Move Forward.” Share your story, and then explore the forum to see what others have shared about their loss.